I have a memory from years ago of my mother taking a career aptitude test at a local college. One of her top results was cartographer, or mapmaker to you and me.

I remember us all joking about the randomness of that career suggestion. I’m certain there are cartographers gainfully employed today in all kinds of interesting jobs, but to us it seemed more like a skill that Christopher Columbus or Magellan might have needed.

But the suggestion made sense.

My mother loves studying maps. As did her mother. So does my son and I do too, as a matter of fact.

It seems to run in the family.

Which is why last November when I was in a store called P.O.S.H. in Chicago and I saw this wall of framed maps I got a little bit giddy. 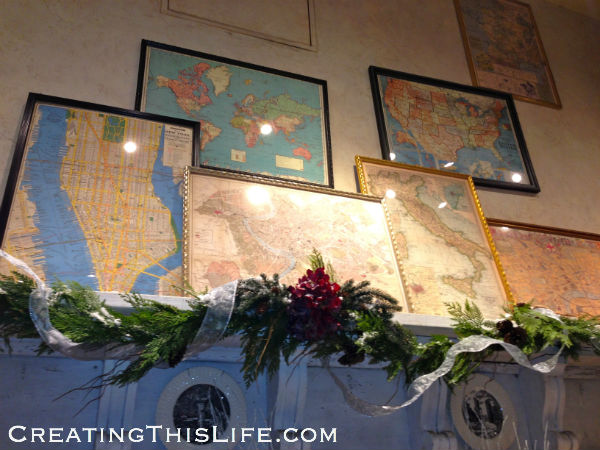 And I was giddier still when I saw they were only $5. I brought home five of them, all city maps from Chicago, New York, London, Paris, and Rome. 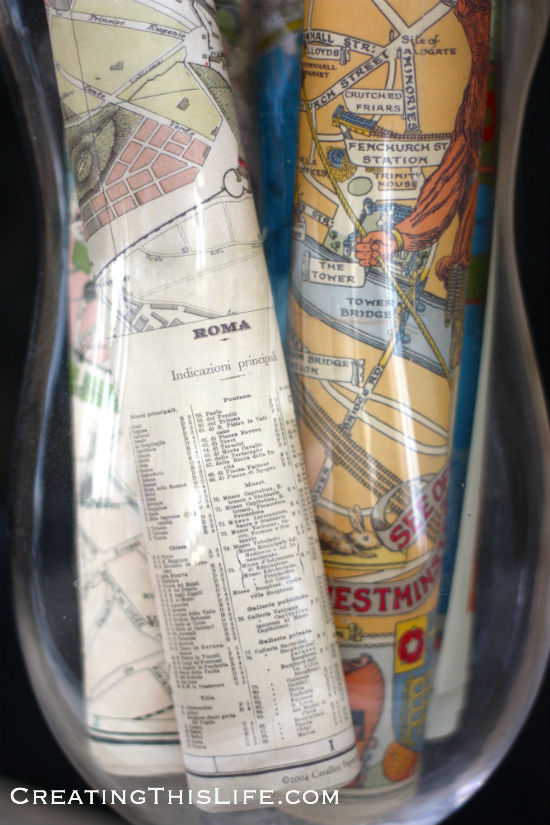 I didn’t realize it when I bought them, but the maps were actually sheets of beautiful wrapping paper made by a company called Cavallini & Co. 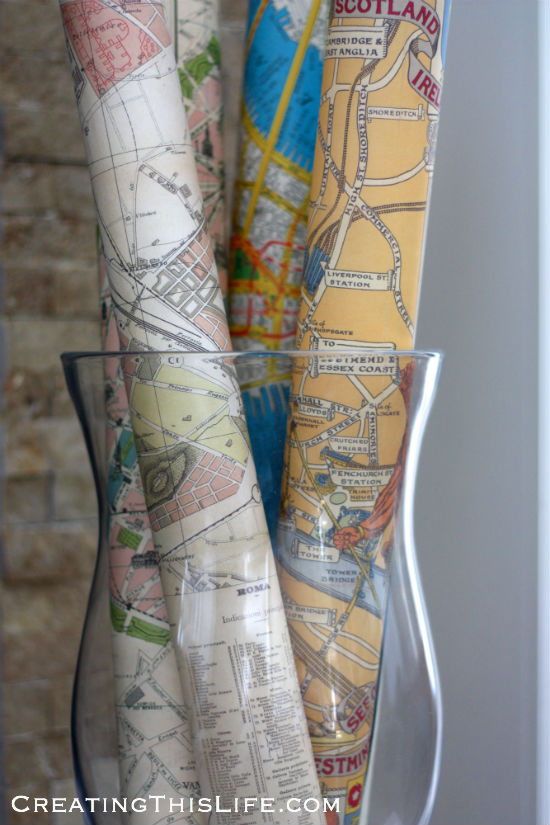 I’ve bought Cavallini & Co. wrapping paper before. I put a tiny section of their map of Italy in this garage sale frame. 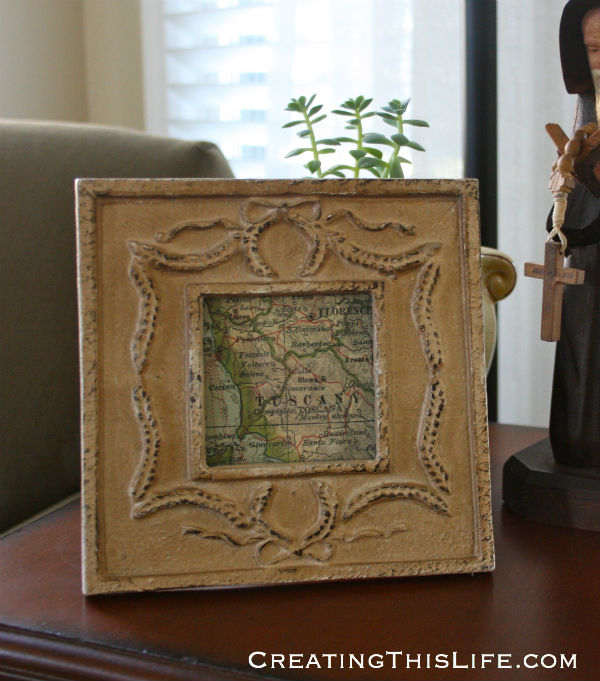 I thought I would frame these five new maps too, and hang them all together for impact. I had a couple of places in mind and even taped them to the wall with painter’s tape to see how they would look.

But they weren’t quite right. It could have been the colors, or the sizes, but I ended up rolling them back up and putting them on a table in my laundry room until I could figure out what to do with them.

Eventually some clear glass hurricanes also made their way to that table and – happy accident – the maps ended up inside one of them just to get them out of the way and keep them from getting smushed. 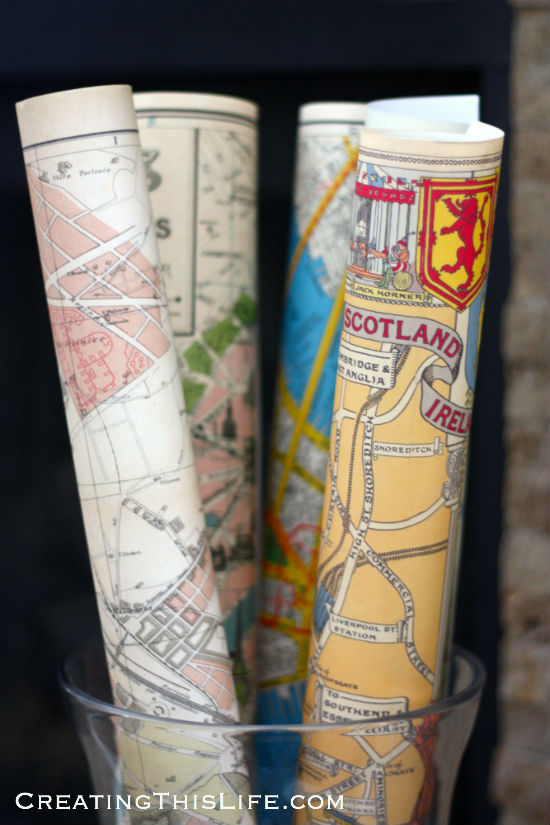 And then while I was looking for something with height to put on the mantel, I stuck the hurricane of maps there. And liked it.

Eventually I moved the vase of maps down to the hearth because I liked the idea that if someone wanted to pull out a map to look at it they could. 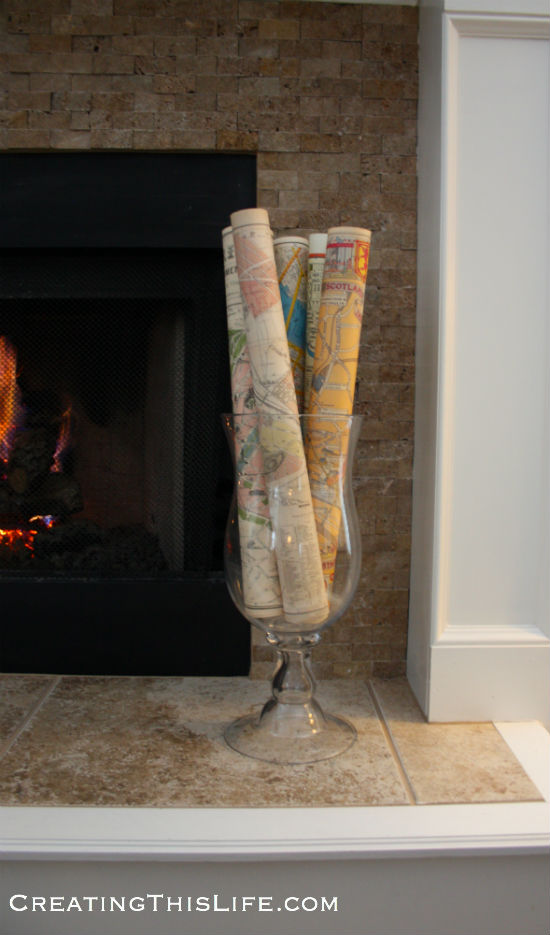 Which is not out of the question in our family.

P.S. Last week at an antique mall I saw a bunch of rolled up blue prints for $3 each. I actually thought of buying a few to do something similar. I didn’t get any but I may have to go back. Blueprints are really just a kind of map, aren’t they?

P.P.S. Cavallini has information on their site about where to find their products. Amazon carries a number of the Cavallini maps too (affiliate link).