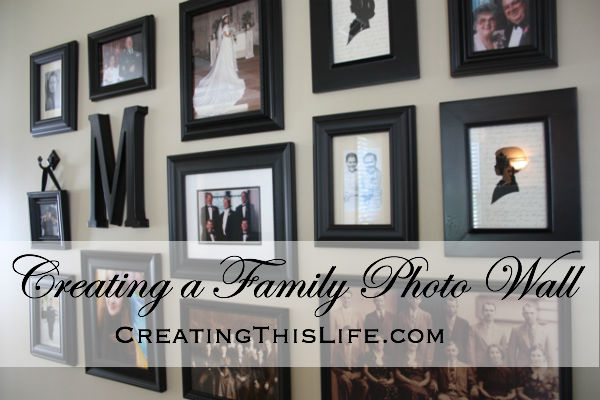 Sometime during the 1930’s, my grandfather, his ten siblings, and his father sat for a portrait at a Kansas City studio. 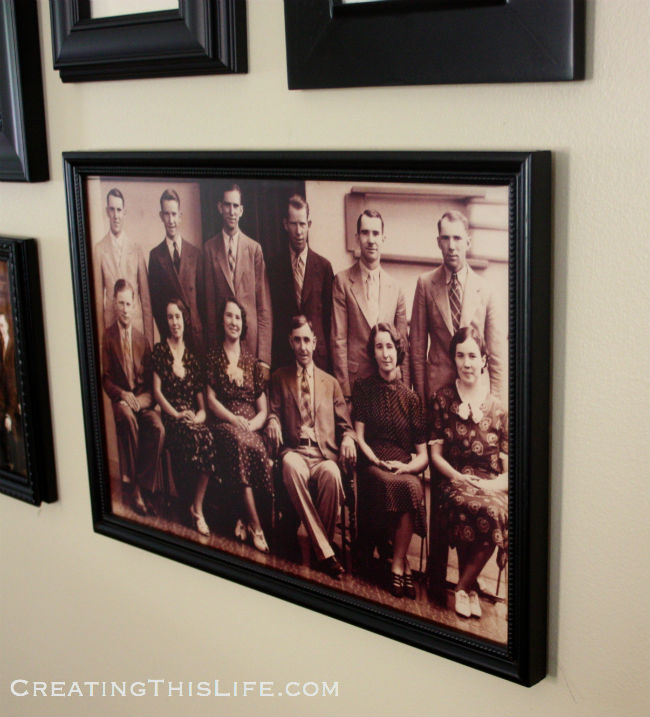 They weren’t a wealthy family – they were just a few years off of their western Kansas farm and several of them were working in the Kansas City packing houses – so I’m not sure what prompted the photo, which I’m guessing was a little rare for that time.

But I sure am glad they did it. 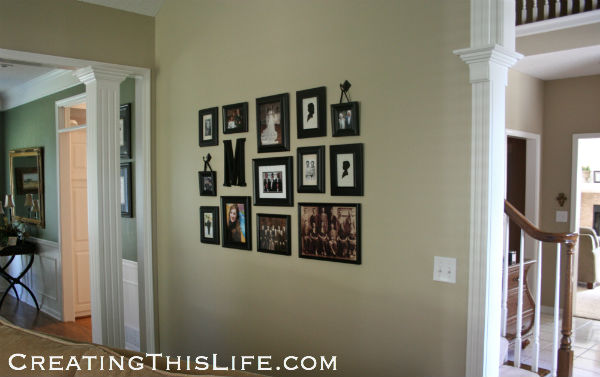 A copy of that photo hangs in my living room in the corner of a family photo collage that I hung as a way to fill up a big wall.

Hanging a wall full of pictures of the people who mean the most to you in the world is one of the most rewarding ways to fill a wall, but it can also be intimidating.

Choosing pictures, choosing frames, and then getting them all hung the right way is a lot to juggle.

Since this was my first attempt at something like this, I did a few things to make it easier.

First, I decided to make all the frames black. That became a unifying feature since I wanted some of the pictures to be black and white and some (like this picture of my beautiful daughter) to be in full – very full in this case – color. 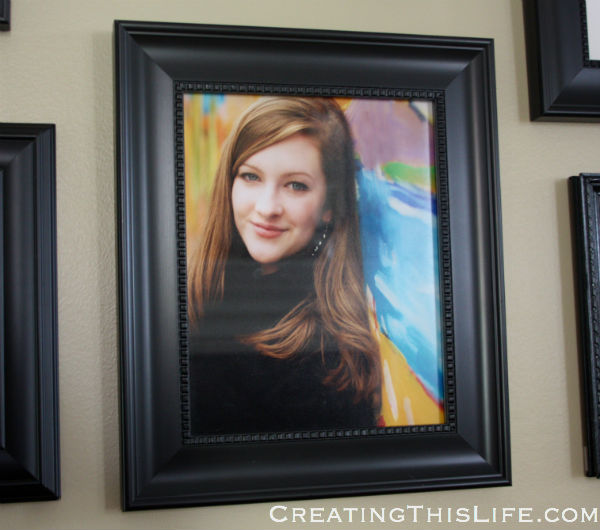 The pictures I was using also included both formal, professional pictures, and informal, candid pictures. Having all the frames black made me feel okay about that combination too.

Here’s where I should tell you that not all of the frames started out as black; but a can of basic black spray paint was my best friend. Painting frames is really super easy and it allowed me to salvage some frames (bright 90’s brass anyone?) that were headed for the donation pile.

When it came time to arrange the frames, I did it on my dining room table first. I created a big rectangle with the outside of the frames, and then filled in the rectangle. 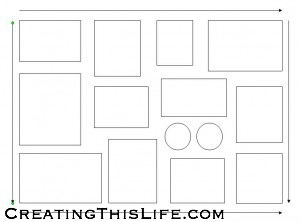 Next, I traced the frame shapes onto brown kraft paper and taped them to the wall using painter’s tape, until the arrangement looked right. Then, one by one, I replaced the kraft paper with the frames.

I also used another little cheat. When this picture of my son (3 years old and in a tuxedo, gets me every time) was too big for the linen mat inside the frame, I just put the picture on top of the mat instead of behind it. No harm, no foul. 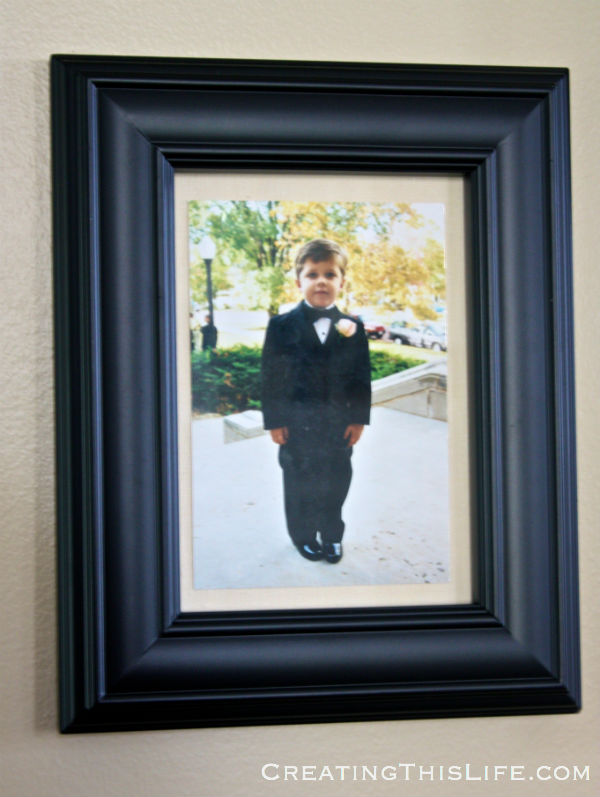 And not all of my pictures were, well, pictures. I included a big M (also spray painted black) for our last name. And since a couple of my frames had ribbons attached, I hung them from hooks I found at Home Depot. 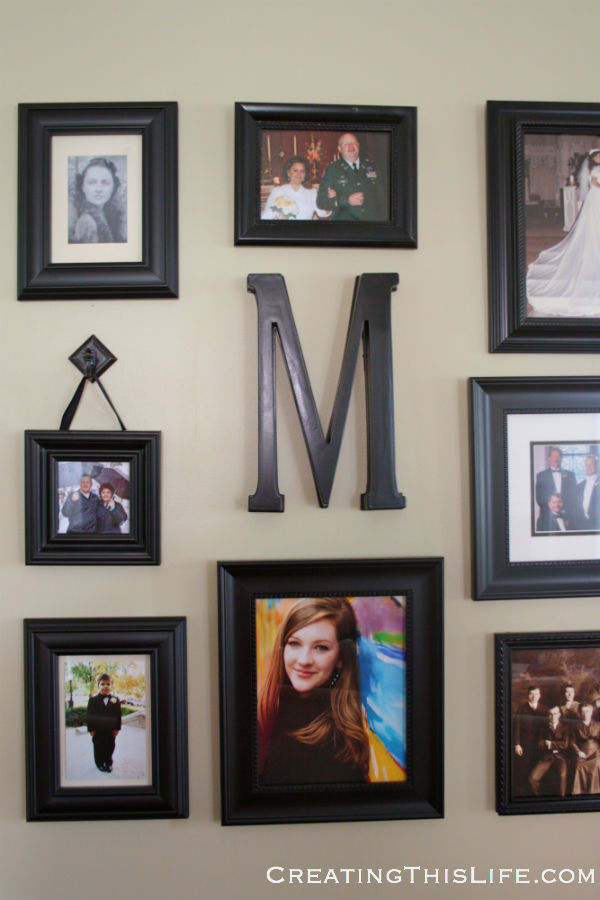 I also included a couple of silhouettes that I had done of my kids when they were much smaller.

The artist had attached the silhouettes to white background paper and I found I could oh-so-carefully peel them off (they were sticky on the back) and attach them to something else, in this case scrapbooking paper. 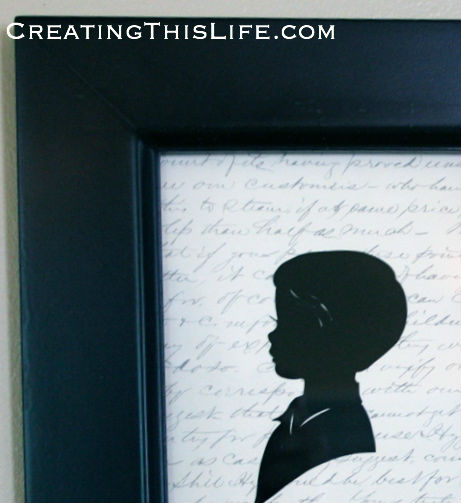 I consider this my training wheels of photo walls. Using the black frames and the rectangle design gave me the confidence to move ahead. 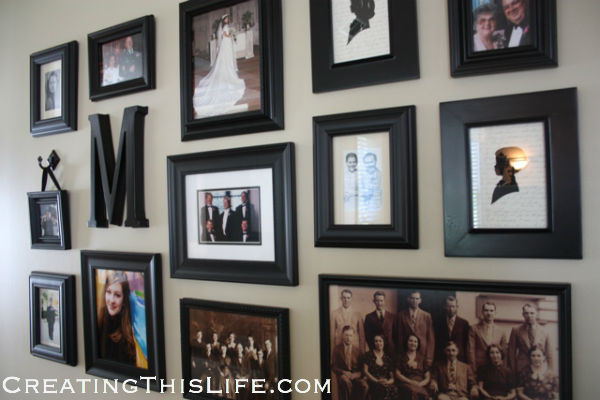 But I have some other walls I’m eying for photo groupings and I think I might be ready to branch out a bit more. We’ll see how that goes.

P.S. I’m sorry for the wonky angles and poor quality of these pictures. This room has the weirdest light and the glass in the frames reflects, which makes good pictures impossible, at least for this amateur photographer.