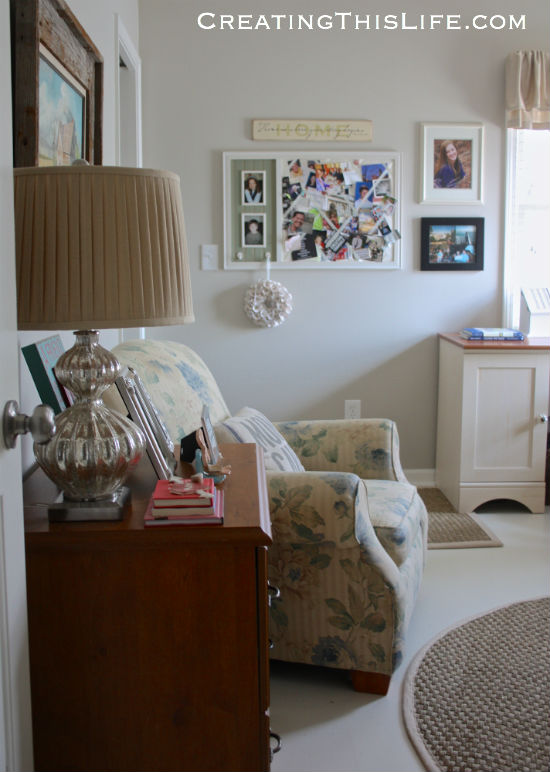 Our house is 22 years old and we will have lived here 13 years this July. So, for the last couple of years we’ve been going through the house a little at a time and doing what we’ve come to think of as a room refresh.

Actually, our handyman, Dave, has been doing the refreshes, which consist of scraping the popcorn ceilings, repainting the walls and woodwork, changing out the door hardware (from shiny brass to brushed nickel) and the switch plates (from off-white to white), and – in some cases – replacing the lighting.

So far we’ve refreshed the master bedroom, master bath, my son’s bedroom, the downstairs half bath, and the family room. The kitchen got a little more than a refresh.

In between we let the dust settle (literally) and allow our bank account breathe a bit, and then we move onto the next space.

When Tom and I were discussing which room should be up next, he suggested the office, since I spend so much time there.

Following are a couple of before pictures. Actually, they’re more like in between pictures because I had already started to pack up and clear out the office. 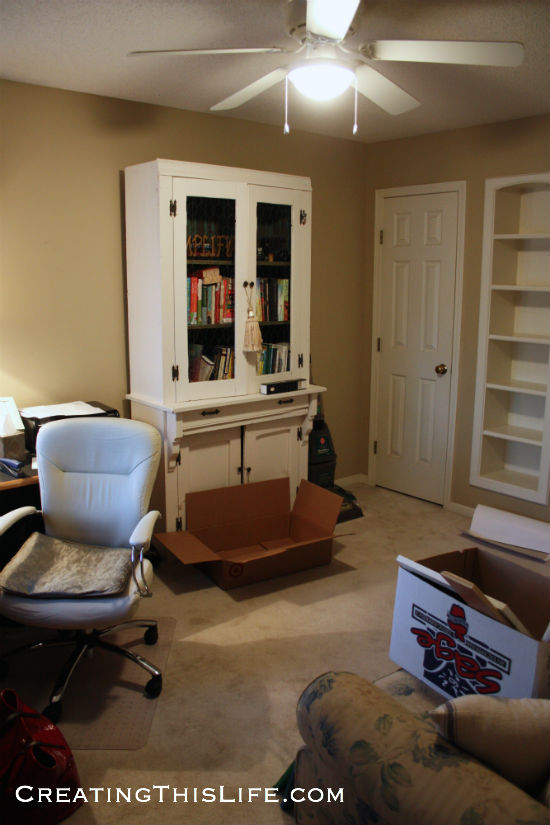 The walls and woodwork in here definitely needed a new paint job, and I’m always happy to get rid of another popcorn ceiling, and we also decided to address the floor in this room. The carpeting had seen better days but we weren’t quite ready to replace the rest of the carpeting upstairs, so we needed a solution for just this room. 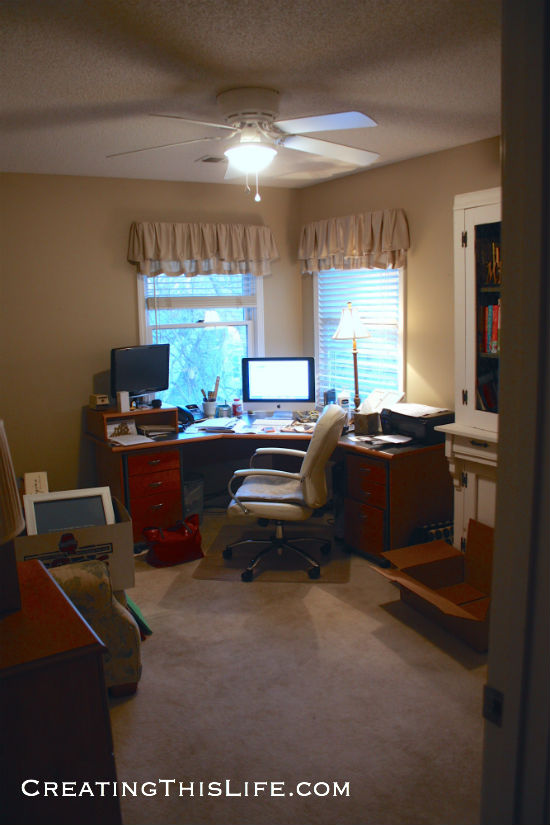 That’s when I asked Dave about pulling up the carpeting and painting the plywood subfloor.

He had never heard of that, but I had seen it here, here and here, so he was game to try. In the end he decided that rather than patching and sanding the subfloor, it would be easier to lay a thin layer of new plywood on top of it and attach it with glue and finish nails. Then he painted the whole thing with porch paint, tinted the color of the woodwork, followed by a sealer. 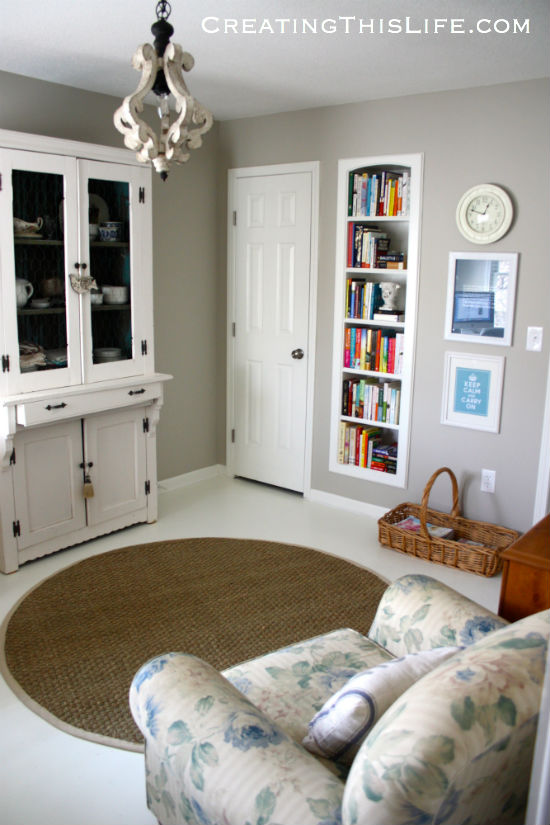 It looks great and – while I’m prepared that I’ll have to eventually embrace the worn look in a room with a white painted floor – so far it seems to be wearing well, even where my chair’s wheels roll on it. (I loved getting rid of that plastic chair mat that I needed with the carpeting.) 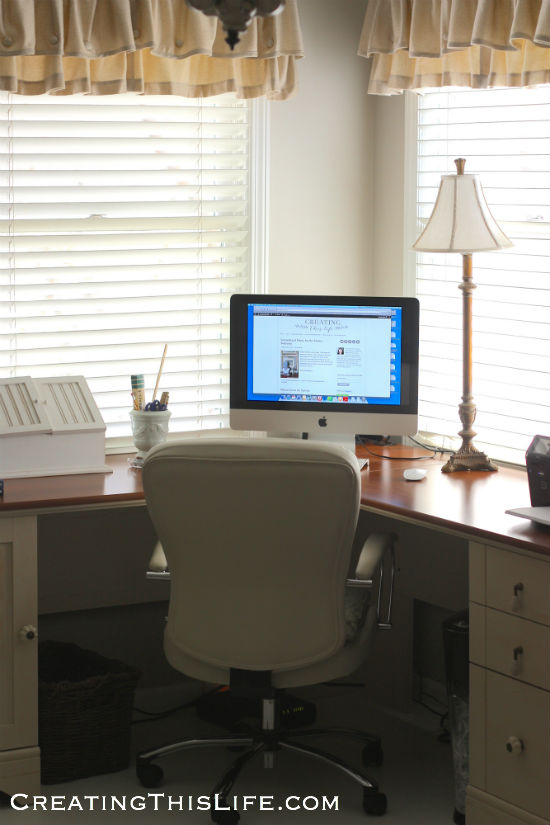 There were only a few new additions to this room, including a couple of seagrass rugs and a new corner desk. I toyed with getting rid of the corner desk arrangement, but kept it because it gives me a big work surface and also lets me take advantage of the view out the second floor windows. The tree line in our backyard is still bare from winter, but when it has leaves in the spring, summer, and fall, it feels a little like working in a treehouse, which I love. 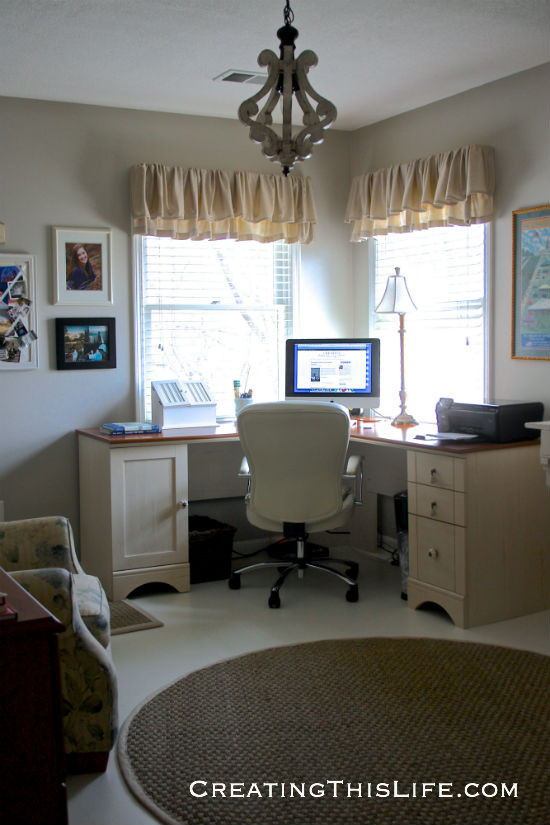 We switched out the ceiling fan for the new light fixture that I told you about earlier.

Everything else had been in the room before, including the floral club chair 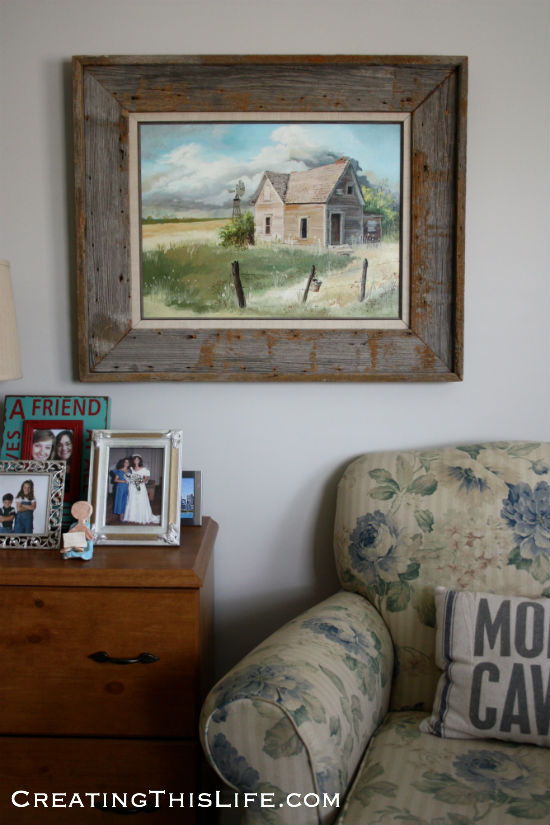 and the cabinet from my grandma’s kitchen (filled with items for a new project in the works). 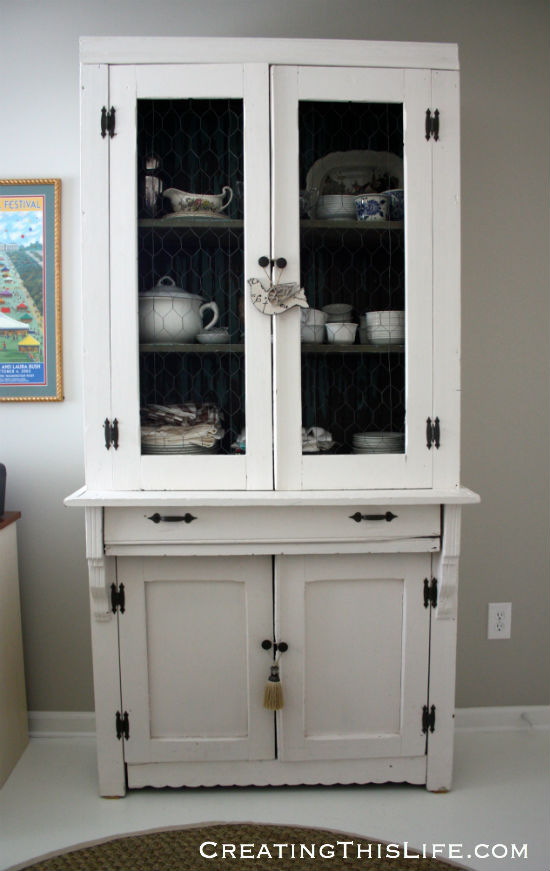 That’s the overview of what was done to the office, but I want to share with you some of the little details as well. I’ll save those for the next post.

This post is part of Sunday Link-Up, Metamorphosis Monday and The Scoop.