Two years ago this week, Lindsey and I were in New York to be on the TODAY show. (Did you miss our 4 ½ minutes of fame? You can see them here.)

The next day was rainy – very rainy – and we were killing time in a bookstore in the basement of Rockefeller Center, waiting on our car to the airport.

There were some books displayed on a wooden table in the middle of the store, and I spotted one called Top of the Morning: Inside the Cutthroat World of Morning TV.

That seemed ironic, seeing as why we were in NY and all, so I picked it up and showed to Lindsey, casually asking her, “I wonder if this book is any good?”

And a guy standing next to us (who I hadn’t noticed before that moment) said, “It is. I wrote it.”

The guy was Brian Stelter, a media reporter for the New York Times, and he really did write the book. I know because I compared his picture on the book jacket to his face, which was right in front of me. 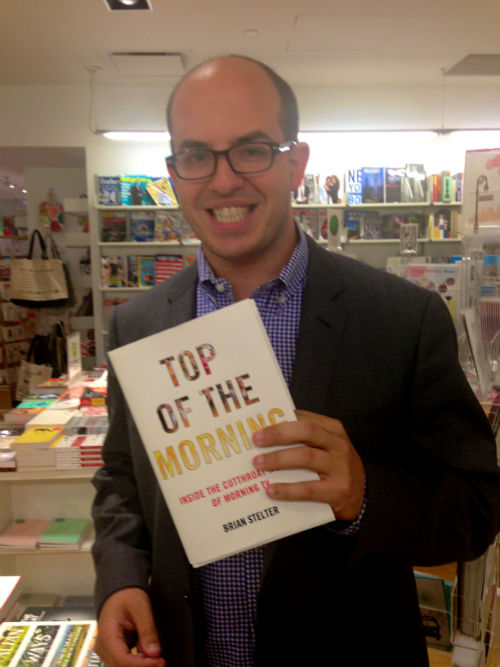 He explained that he was meeting someone nearby for an interview and the person was running late, so he had stopped in the bookstore to see if they were still carrying his book. Weird, right?

Well we got to tell him that we had actually been TODAY show guests the day before. He asked who our anchors were (answer: Willie and Natalie) and I – not wanting to waste the opportunity – asked him a couple of questions about the whole Ann Curry/Savannah Guthrie/Matt Lauer TODAY show drama. (I would tell you what he said but you people really need to get your own media sources.)

Anyway, he went on to his interview and we of course bought the book. So later in the day Lindsey tweeted this. 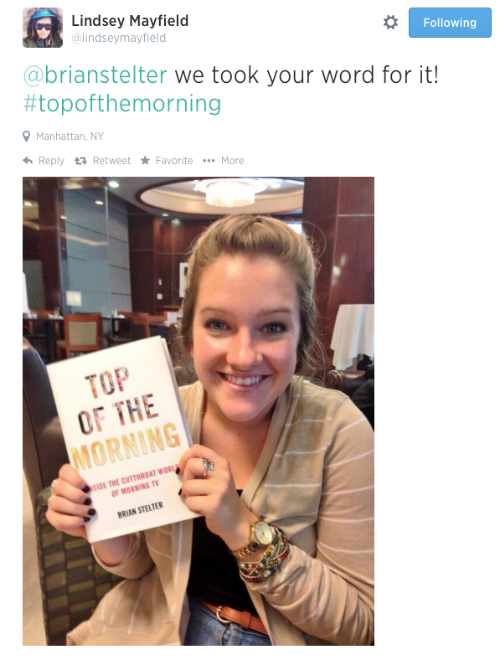 And Brian Stelter tweeted back this.

And then Gawker picked up the conversation and Lindsey’s Twitter blew up for a while.

Shortly thereafter we boarded a plane and flew back to our regularly scheduled lives. Brian Stelter, on the other hand, went on to become the host of CNN’s Reliable Sources a few months later.

And to bring this whole morning TV saga full circle, Lindsey’s new job is as a morning news producer at one of our local TV stations.

See? I told you. Funny story.