I’ve haven’t talked a lot about our bedroom on the blog. That’s because it’s a room in transition. My main goal has been to make it less matchy, starting with the bedroom set we bought 28+ years ago when we were still engaged.

The bedroom set is a nice one; sturdy and well-built and in amazing shape for something its age. But it’s not my style anymore and the pieces don’t serve us well for the way we live (no place to hide the TV, for example).

And then there’s the matchy thing. Like with silverware, I once grooved on sets of furniture but now I prefer things mismatched. 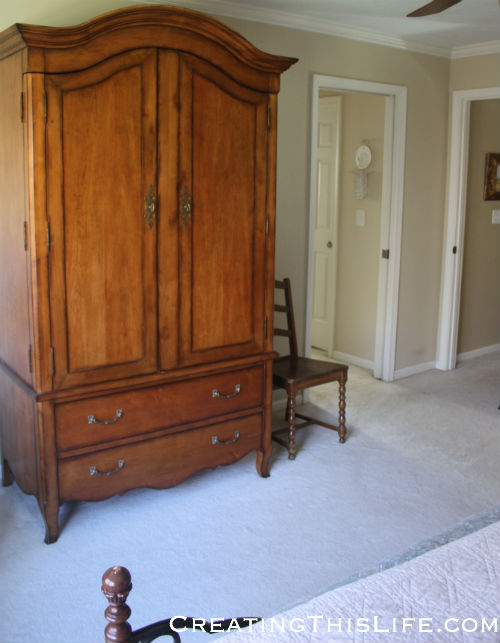 So I replaced Tom’s tall dresser from the old set with an armoire and my long dresser with an antique chest (both Craigslist finds). 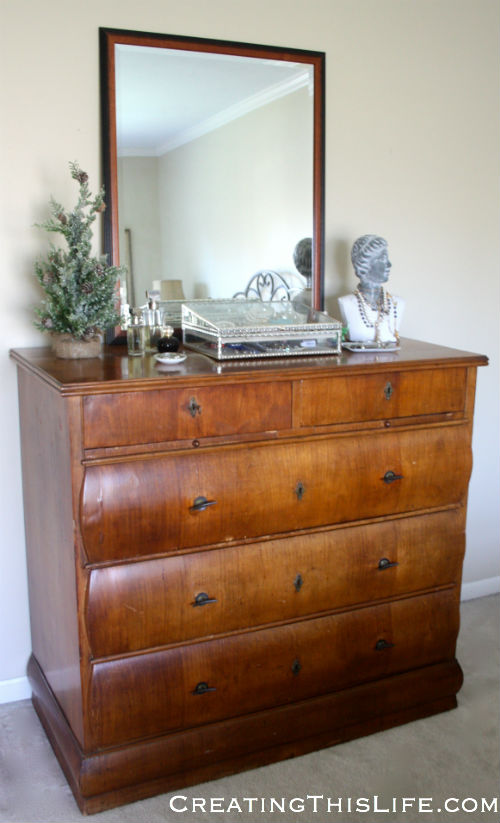 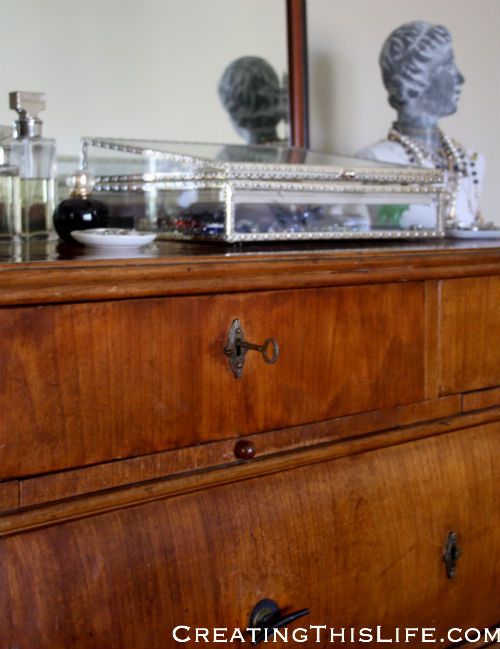 And over the long Thanksgiving weekend I ordered two small tables from Joss and Main (affiliate link) to use as nightstands.

The nightstands were delivered last Friday and, after I had my daughter pull the boxes in from the front porch, I dragged them up the stairs to master bedroom. (I’m counting on the fact that my orthopedic surgeon doesn’t read blogs, because she removed the plates and screws from my wrist last Monday with instructions not to lift or pull anything more than five pounds for the time being.) 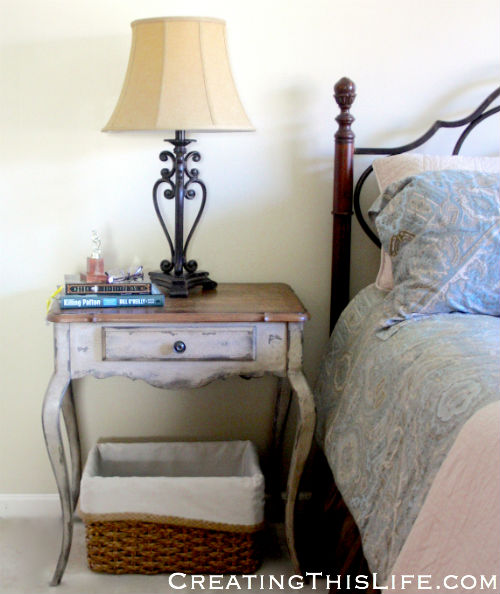 The only assembly required was attaching the legs to the nightstands, which was waaaay easier than cleaning up all the tiny styrofoam pieces that the packaging left all over my floor and bedding. (I think I groaned out loud when I cut open the boxes and saw the styrofoam. I hate that stuff, don’t you?)

Packaging aside, I love the shape of the nightstands and the fact that the tops are stained and the bases are painted. The biggest difference between these and the old nightstands is that the old ones had two deep drawers each and the new ones have just one shallow drawer. You might see this a challenge – a drawback even – but I saw it as an opportunity. That’s how I sold it to Tom too. 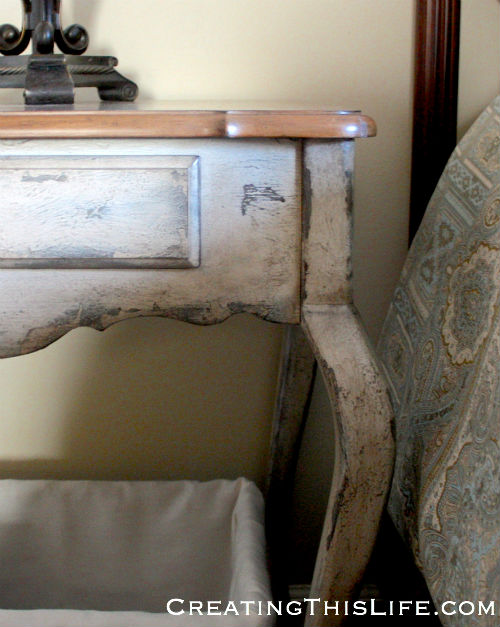 Because the truth is that the former deep drawers (four in all) didn’t hold much that really needed to be in a nightstand. They had become storage facilities for, well, here’s a partial list of what we pulled out of them:

On Saturday we went through the drawers and created toss/donate/relocate piles with the contents. This exercise clearly established Tom as the more sentimental of the two of us. Not only did he have more keepsakes in his nightstand than I did, but he took the time to take a little walk down memory lane with each one. 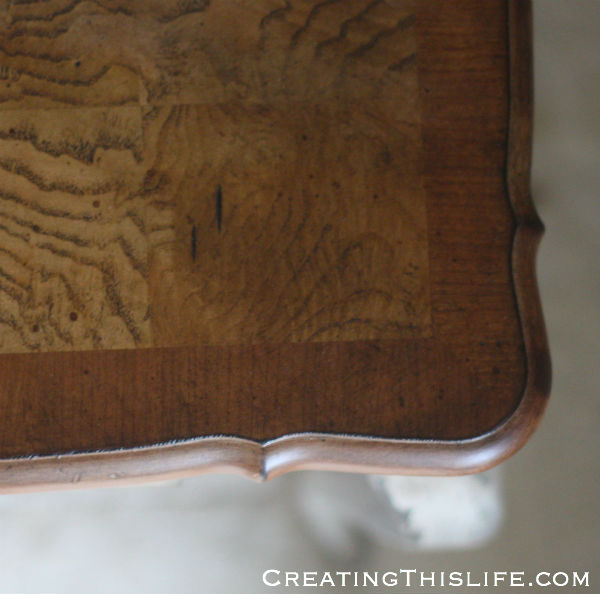 I, on the other hand, as someone who gets an actual endorphin rush from cleaning out a closet, stayed laser focused, all eyes on the prize style. And the prize in this case was a simplified, streamlined nightstand.

In the end, we each rose to the occasion in our own way. We recycled old bookmarks and magazines (mine) and the programs from the 1990 Children’s Mercy Golf Classic and a 2001 Nascar race (Tom’s). We trashed the gummy cough drops and relocated the pens and stray paperclips to the office.  And we put the sentimental keepsakes in a box just for that purpose.

Then we refilled the little drawers with things that actually belong in nightstands, putting a basket underneath for books and magazines and other things that were too big for the drawers. 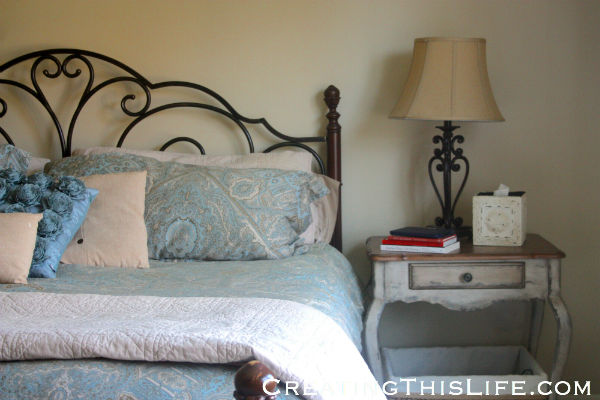 And the drawers are now things of beauty. I’m trying mine out as a charging station for my cell phone, iPad, and Kindle. There’s just enough room for those plus other small necessities like Chapstick and a nail file. Tom’s drawer mostly holds reading glasses and sunglasses for now.