Last summer (or was it two summers ago…just checked…two summers ago) I volunteered for an afternoon at my library’s used book sale.

The sale was being held in the lower level of a now defunct mall. The same mall where my Aunt Susan once bought me a personalized Christmas ornament at a Hallmark store. The same mall where a boy took me to see a movie after giving me a gold necklace in an orange box for my 17th birthday. The same mall where we lost, and later found, my baby son’s Gymboree coat when it fell out of the stroller while he and his sister were having their picture taken with the Easter bunny.

And this June day, years later, found me back in that mall, assigned to the fiction paperback section of the book sale. My job was to pull donated books from the boxes below the tables that had been set up, and arrange them for sale on top.

The person in charge told me not to worry about organizing the books, to just get them on the tables. But as my shift wore on I found the urge to organize irresistible. I started putting together little groups of books by the same author because, I reasoned, if someone came looking for a book by Nora Roberts or John Grisham or Mary Higgins Clark, he or she would probably like to find several others nearby.

And come they did.

They arrived carrying lists — everything from computer spreadsheets to well-worn spiral notebooks — that catalogued which James Patterson or Sue Grafton books they had already read, and which ones they still needed to find. And then it became a happy challenge for me to try and remember exactly where on the many tables I had seen books by that author. It was like one of those memory matching games, literary style. And it was awesome. 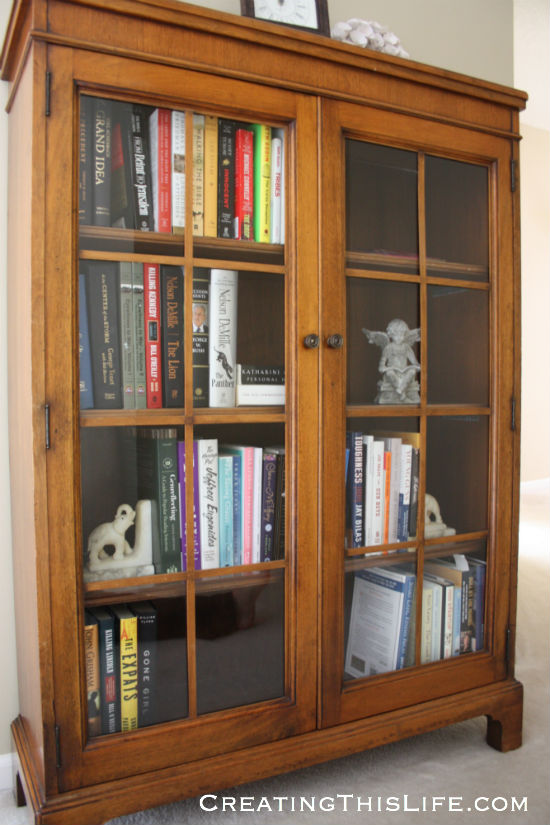 I tell you all of this to say that I come by my book organizing tendencies honestly. And so you won’t be surprised to learn that I’ve spent more than a few hours over the last several days going through all the books in my house that don’t belong to my kids.

As part of my simplifying effort I filled a box with books to donate. And the rest I dusted, grouped loosely by genre and author, and reorganized onto the bookshelves in our piano room, my office, and a cabinet in the upstairs hallway. (Lots of trips up and down the stairs, I tell ya. Too bad I wasn’t wearing my Fitbit.)

Oh and I replaced all of the book jackets, which I had previously taken off.

Sidebar: let’s talk about book jackets. Are you pro or con? I took the book jackets off our books for a decorator look, but it turns out I’m more book lover than decorator. I missed being able to skim the plot summaries or read about the authors. Turns out a book jacket is part of the book for me. You? 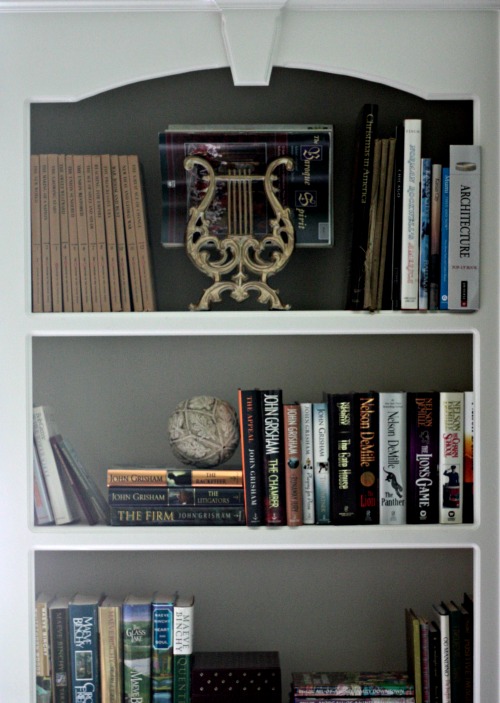 All of this playing with books gave me a chance to create a to-read shelf, which I’ve wanted to do ever since I read about Emily Freeman’s bookshelves on Modern Mrs. Darcy. Seeing that she had designated spaces just for books she wanted to read or re-read was a palm to the forehead moment for me: so simple, so obvious, so genius. It’s like having your own mini library or bookstore on a shelf. 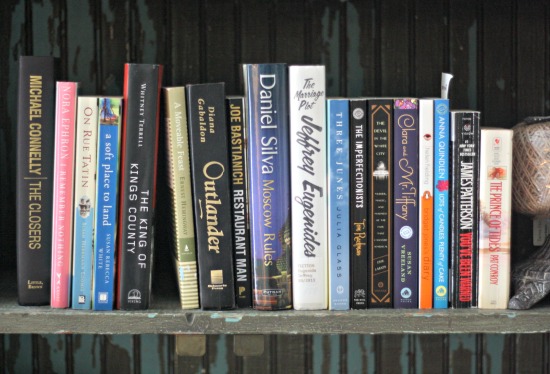 I filled my to-read shelf with books that I had never gotten around to reading, or books that I had started reading but stopped. Another sidebar: I’m not opposed to abandoning a book I’m not that into; I do it all the time. But some books you just want to give a second chance, know what I mean?

A couple of books on my shelf came from that same book sale two summers ago (The Marriage Plot and Nora Ephron’s I Remember Nothing). And two books I didn’t even remember I had but was thrilled to discover I do (hello In Cold Blood and The Prince of Tides).

The best news is that after all this dusting and rearranging, I found that I have plenty of space left on my bookshelves for more books. Which is a very good thing, because the library’s summer book sale starts today and this time it’s being held at the community college that’s just on the other side of the tree line in my back yard.