My most vivid memory of our trip to Savannah, GA a few years back was a different kind of trip. More of a fall, really. 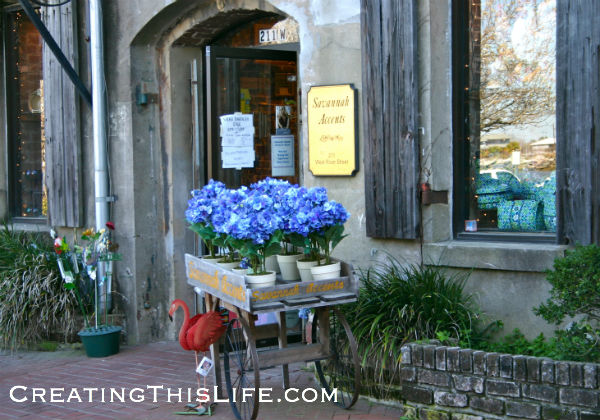 I was making my way from River Street – where I had been shopping – back to our hotel. I was alone (Tom was golfing) and the stretch of street I was on was empty except for me and two construction guys who were pushing some kind of cart on wheels.

The lack of company was fortunate because I stepped in a hole, twisted my ankle, and went down hard. Embarrassingly hard, as it turns out, with my purse flying one way on the street and my camera clattering the other. 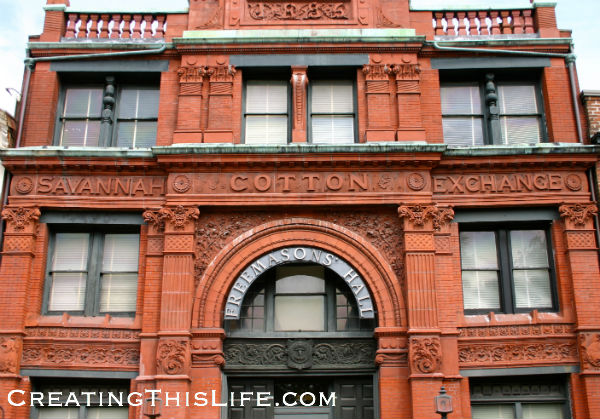 The startled construction guys asked me if I was okay and I said I was, but truthfully I was wondering if they were going to have to throw me in their cart and push me back to the hotel.

Somehow I hobbled back on my own (extreme humiliation gives you super powers, you know) and when Tom got back from golfing he bought one of every brace and wrap the drug store had and we went on with our trip, because that’s just the kind of trooper I am. (Just kidding. I was going to see Savannah if I had to drag along a broken leg to do it.) 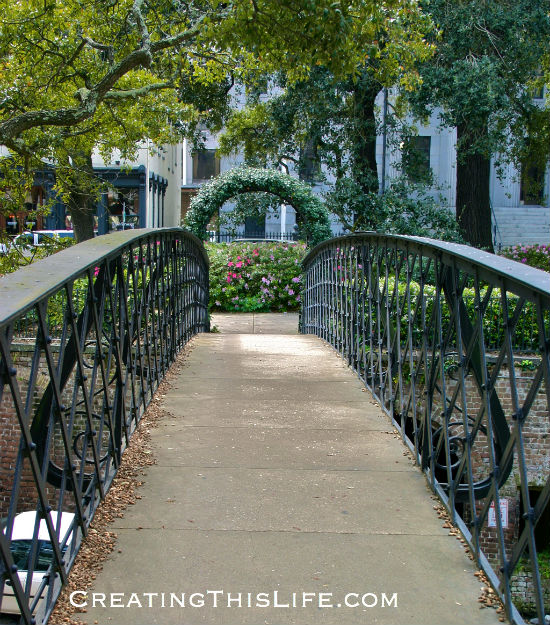 Anyone who has been to Savannah knows it’s a special city – historic, a little haunted, and so very charming.

Charm is my favorite thing and I came back with a memory card full of it (the camera lived) because you really can’t take a bad picture in Savannah. Theses are some of my favorites from that springtime trip.

What is it about a southern square? It makes you feel like you’re in the middle of a John Grisham novel. And Savannah’s historic district has beautiful squares and parks. 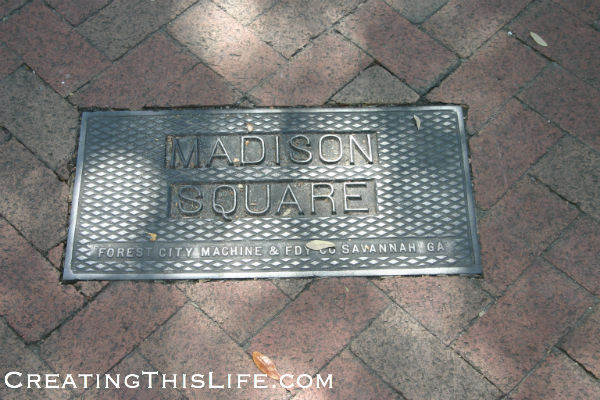 See all that wonderful moss hanging from the trees? You don’t get that in Kansas. 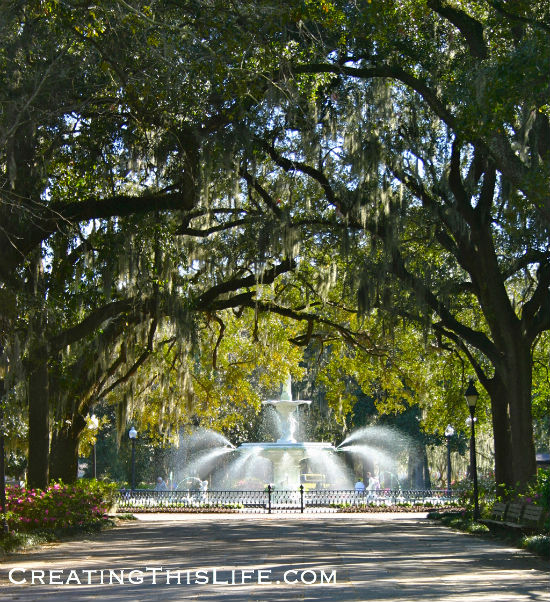 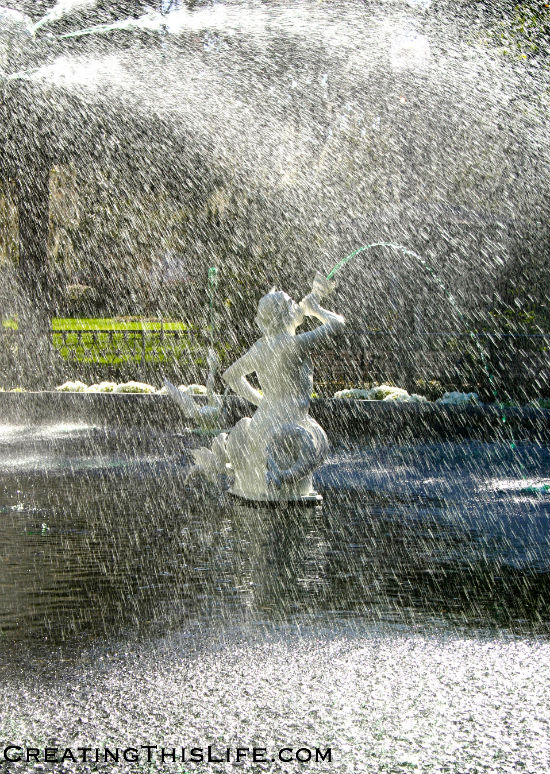 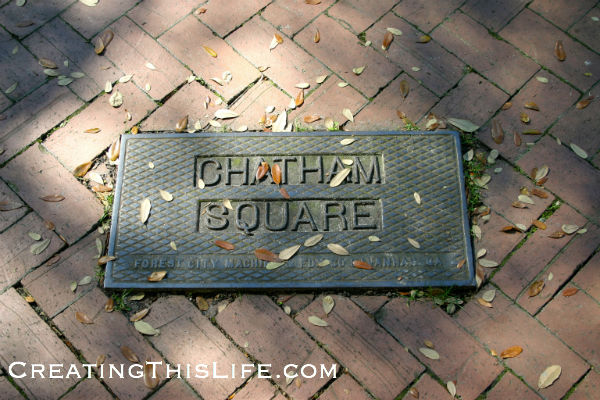 This little barber shop looked like something from a movie set. 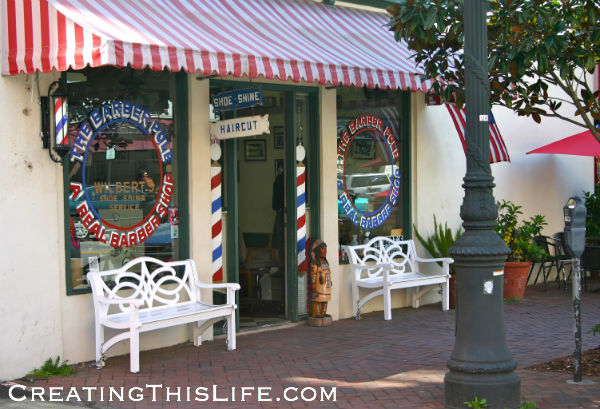 And the funky vintage/retro bikes that the students from SCAD (Savannah College of Art and Design) ride were everywhere. A girl we were talking to told us they’re cheap and it’s also easy to identify yours if someone takes it. 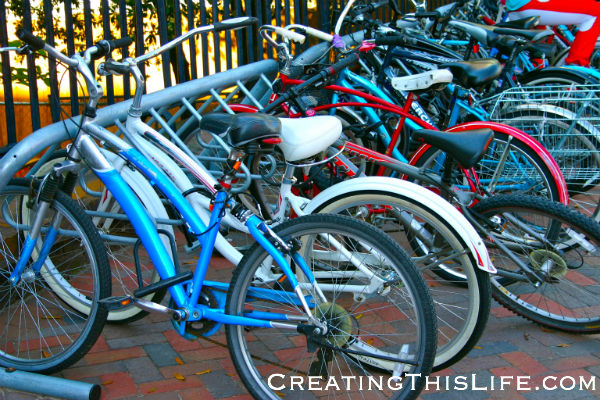 If you like movies, you can see some familiar sites in Savannah. I didn’t get a pic of the bench that Forrest Gump sat on, but it’s there. So is the pub that a scene from the Julia Roberts/Dennis Quaid movie Something To Talk About was filmed in. 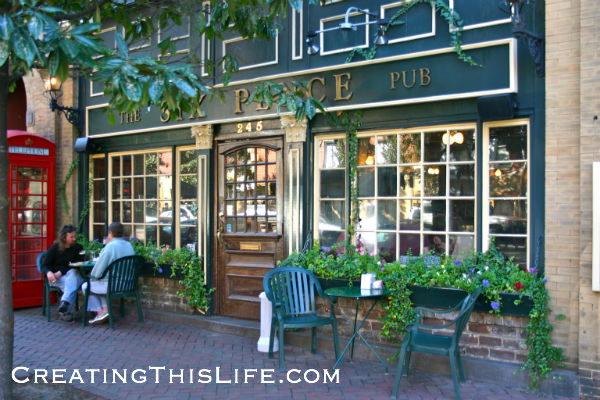 There’s also Mercer House, where Jim Williams – the subject of the book  Midnight in the Garden of Good and Evil – lived and where the movie was filmed. You can tour the house and we did. Fascinating on a number of levels. 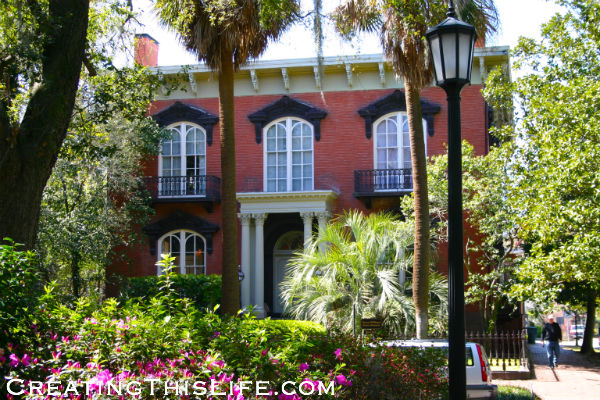 Speaking of houses, and you knew I would, Savannah is full of gorgeous homes of all kinds, from the very quaint to the very stately. 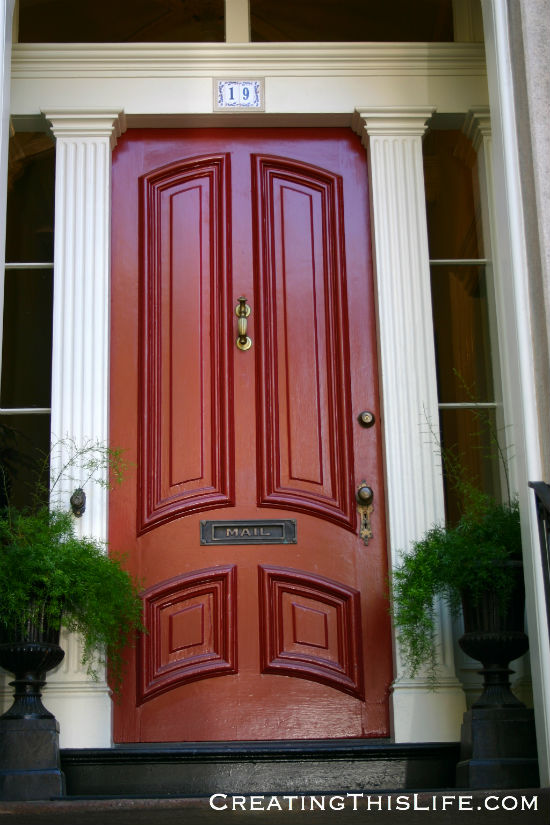 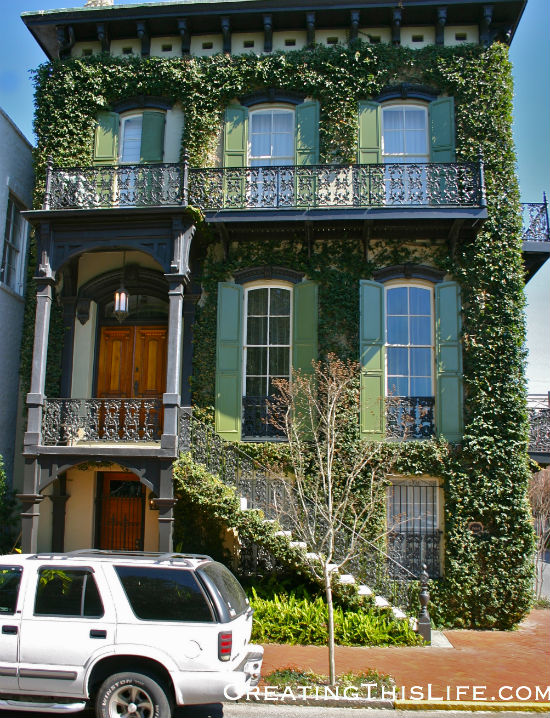 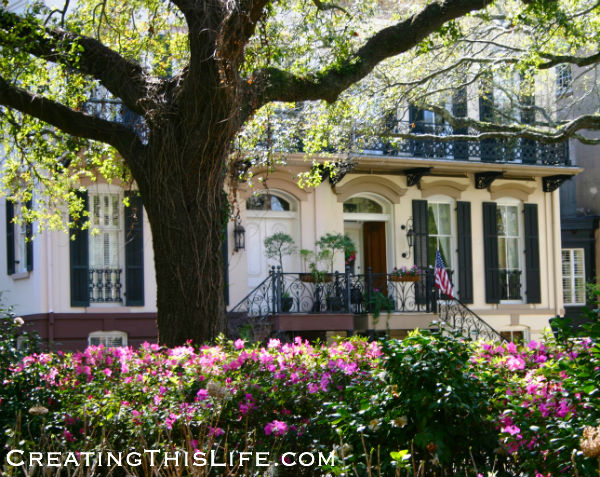 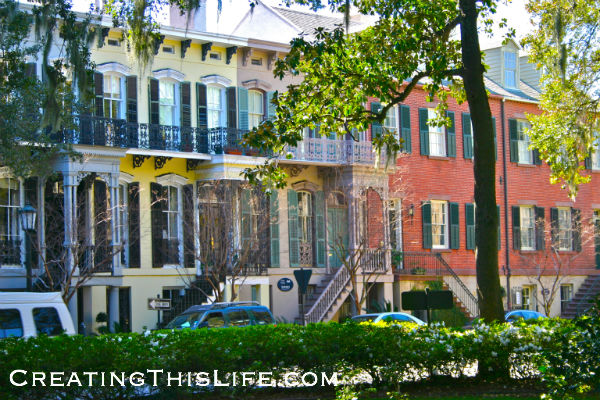 Savannah even gives basement apartments and downspouts a good name. 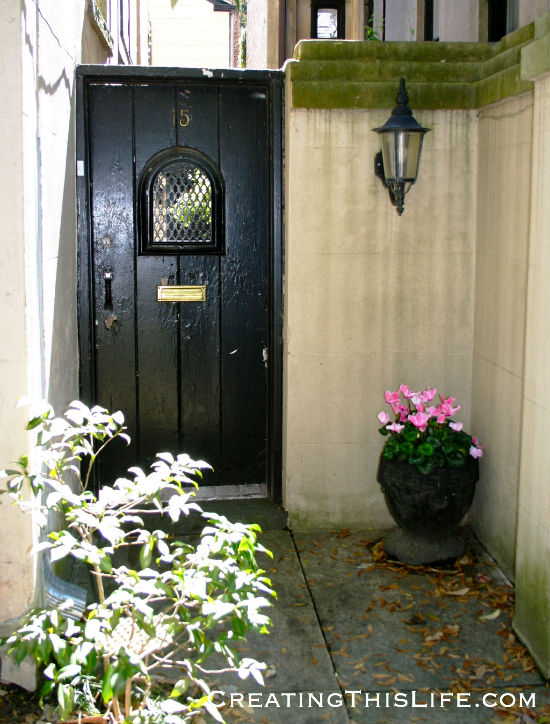 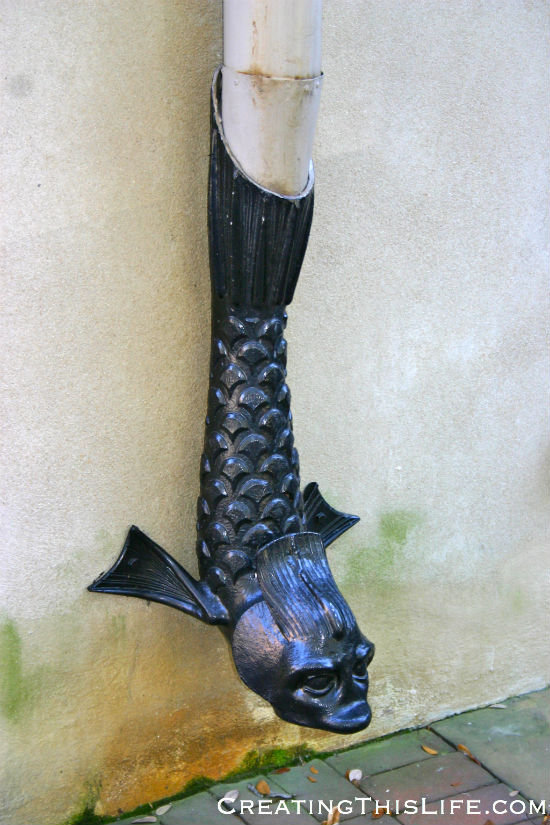 One thing that always intrigues me in the older parts of any city are the faded remnants of signs that were painted onto the sides of brick buildings. I’ve heard them called ghost signs and Savannah has no shortage of them. 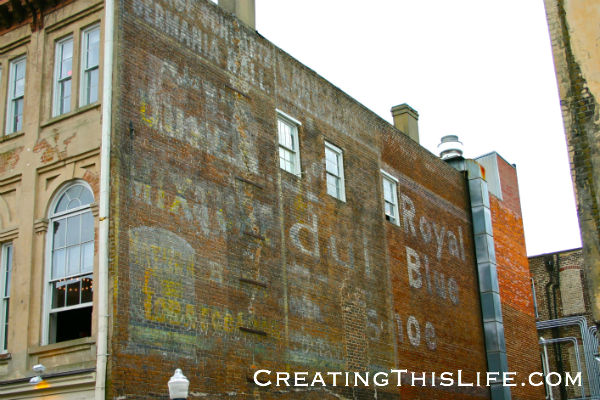 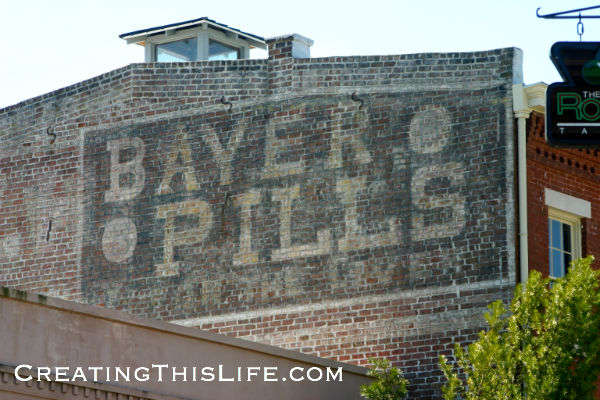 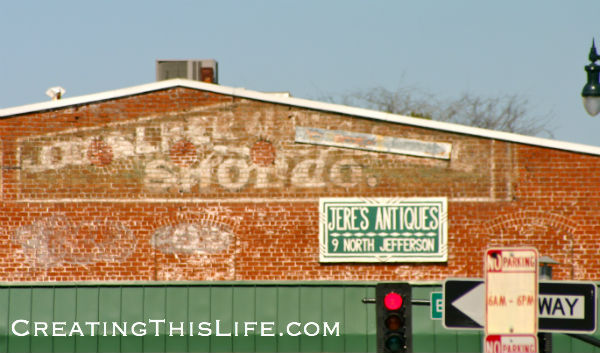 Just as it has no shortage of flowers. 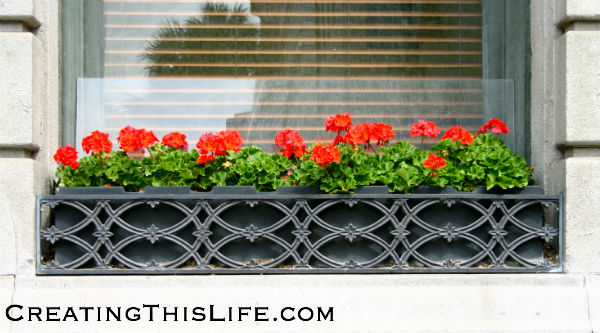 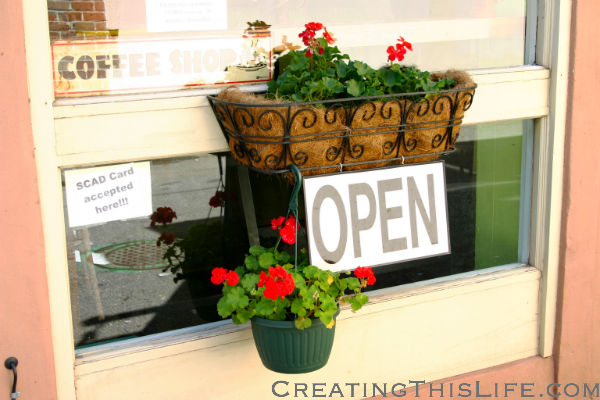 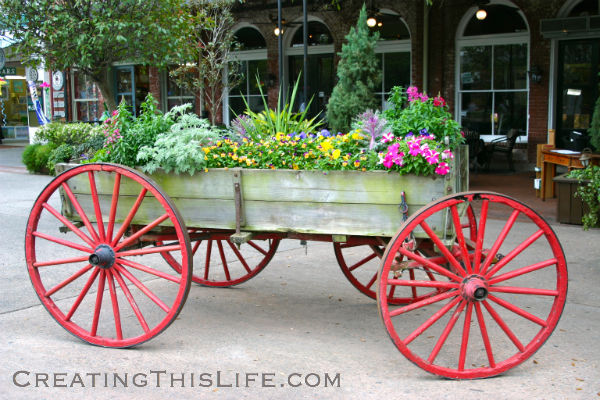 The flower cart was in Savannah’s City Market, where you can buy candy, browse art galleries, and also catch a horse-drawn carriage. 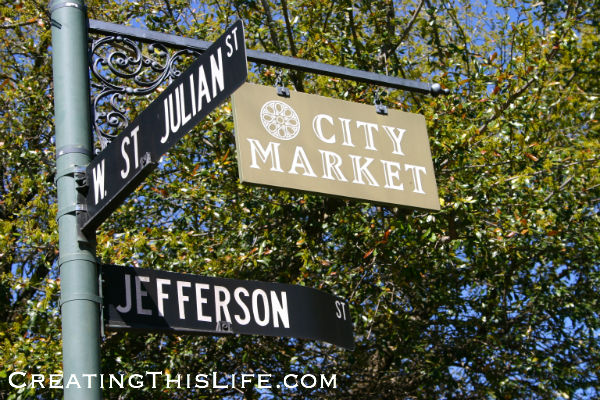 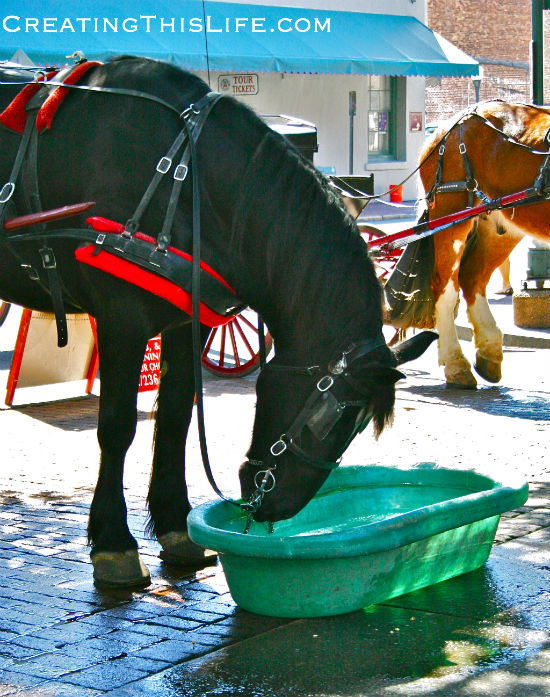 And City Market is where I spent the afternoon after my trip (the other kind) with my foot propped up on a chair at an outdoor cafe. Not a bad place to nurse a sprained ankle and a wounded ego.