On Tuesday we got slammed with snow. A foot of it.

Grant was out of school from Tuesday until Thursday. 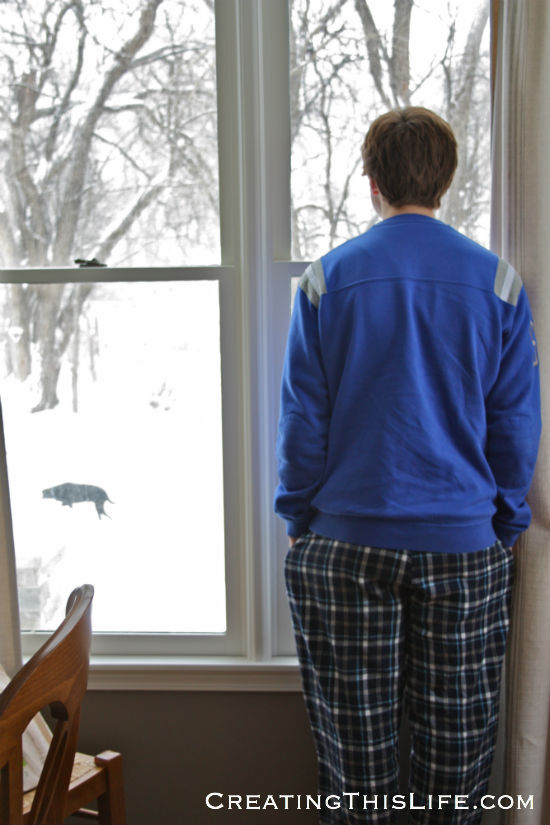 Lindsey and her roommates got a couple of snowdays at KU.

And even Tom came home early to work from home on the day the snow hit. 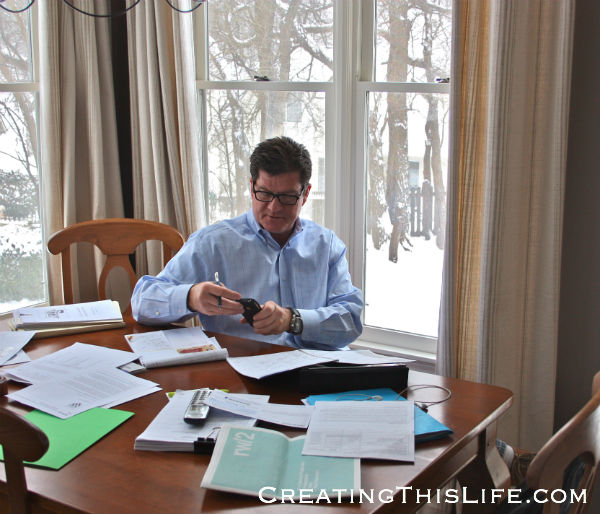 It’s almost unheard of for Tom to alter his schedule because of the weather. In fact, it’s a joke in our family that no matter how bad the conditions are, if you ask him about them as he walks through the door he’ll answer, “not bad.” 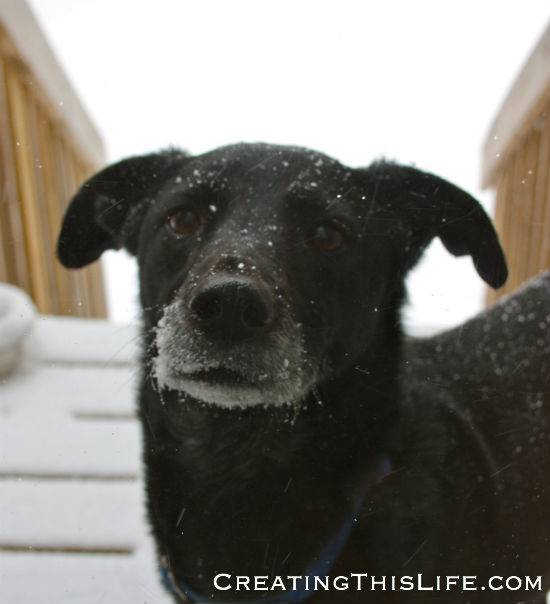 I actually love most things about being snowed in, including all the preparations the day before. I shop the grocery store like we’ll be snowbound for weeks and I always fill the car up with gas even though I’ll be going exactly nowhere.

I love the anticipation of waiting and watching and website refreshing to see if the kids will be out of school.

I love being snuggled in with a fire in the fireplace and something in the slow cooker. (Tuesday it was a roast, which became Wednesday’s vegetable beef soup.)

Snow days are nesting at its finest. 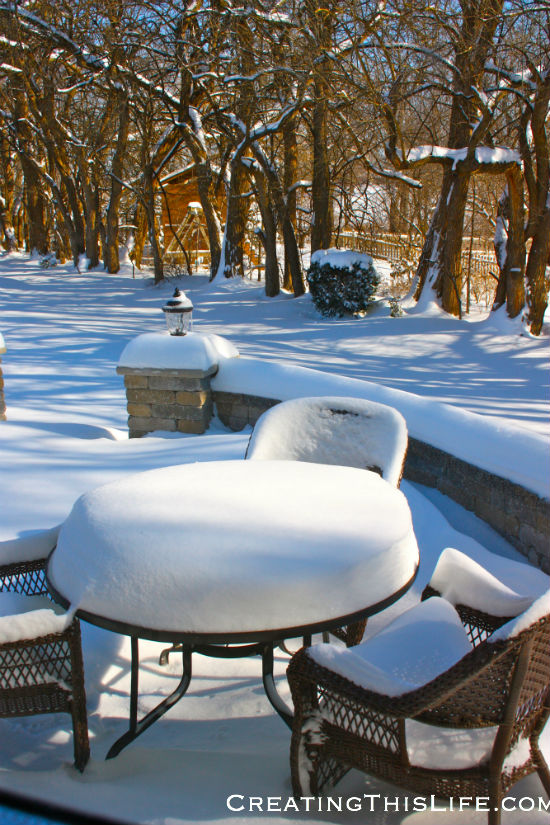 But three days was quite enough.

Despite the full sun we’ve had since Wednesday, not a single flake of snow has melted due to the still frigid temps. And just an aside: when they call off school due to freezing temps, they’re definitely not doing it for high school boys. Grant and his friends were sledding late into Wednesday night. All despite my warnings of how easy it is to get frost bite.

I knew they had survived when I found empty hot chocolate mugs in my kitchen sink the next morning.

I wandered out myself yesterday afternoon, to go see Chuck, the upholsterer.

I emailed him last week about these chairs and ottoman, recent estate sale finds, and he told me to bring them on in. 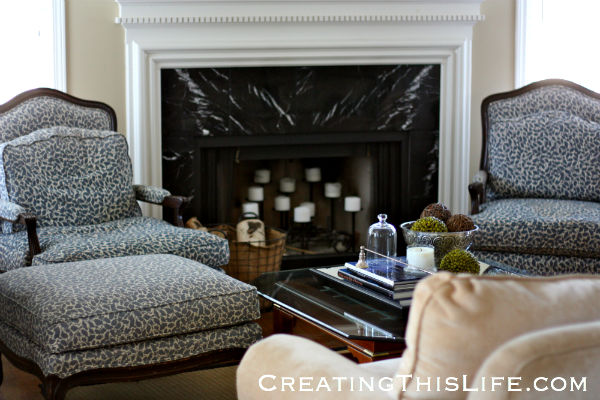 Two weeks ago I went to a sale precisely because of these chairs. When I got there (an incredible three story house on a wide boulevard with other amazing houses lining both sides of it) the chairs and ottoman were exactly as pictured and I was pleasantly surprised by the price.

Still, I wasn’t sure.

They were large – larger than I had expected – and very French (obviously) which I like, but it hasn’t really been my style.

So even though I thought they were amazing, I couldn’t commit. I bought the basket with the little indent in it from this post and I left the chairs behind. 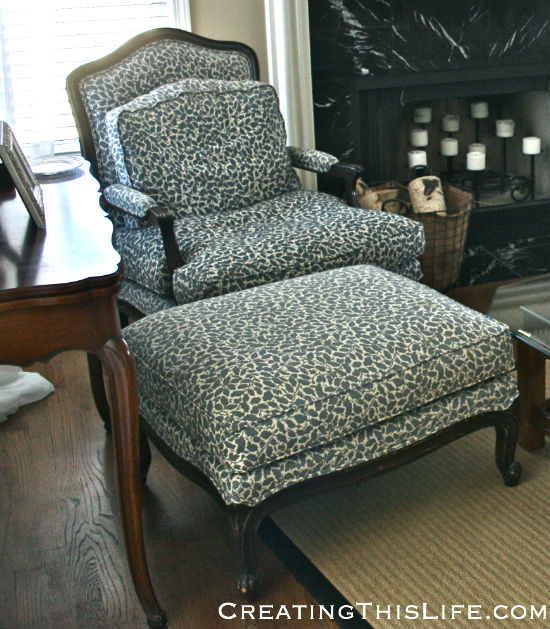 Later that night I was flipping through a Ballard Designs catalog and saw this. My chair(s) and ottoman. Turns out the style is called Bergere, which my mother had already asked me if they were, because French is definitely her style.

And I found myself with a case of non-buyer’s remorse.

I asked Tom what he thought and he encouraged me to go back the next day since anything left at the sale would be 25% off. He reminded me that I could always re-sell them if I got them home and decided they weren’t right.

Except the next morning I was scheduled to help set up at a school fundraiser. So I oh-so-hopefully asked Tom if he would be willing to go see if they were there for me. (This isn’t even remotely the bravest furniture related request I’ve made of him. Remind me to tell you the story of our dining room hutch.)

He said yes (great guy!). And the chairs were still there (hooray!). And he even managed to get both chairs and the ottoman in the back of my Toyota Highlander. (Tom has major ninja packing skills, which are amazing to watch. Any time we’re packing the car, our family knows to just stand back and let him work his magic.) 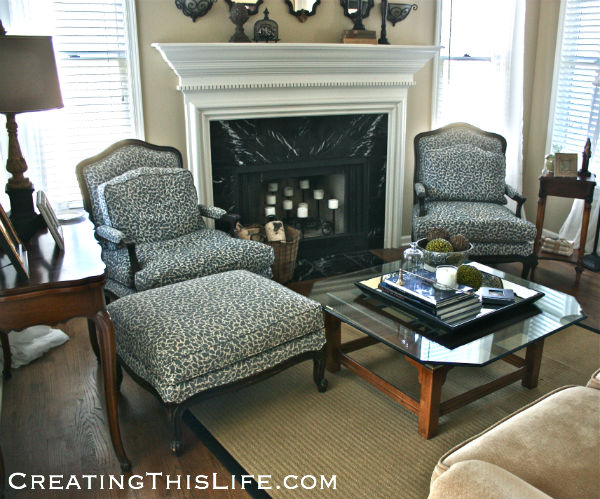 And as you’ve probably guessed, because you’re so smart and because this post would be pretty pointless if it turned out any other way, I definitely wanted to keep the chairs.

So yesterday I went to see Chuck to drop off one of the chairs and look at some fabric. I brought home a few samples and I’ll take the other chair and ottoman to him when I take the samples back.