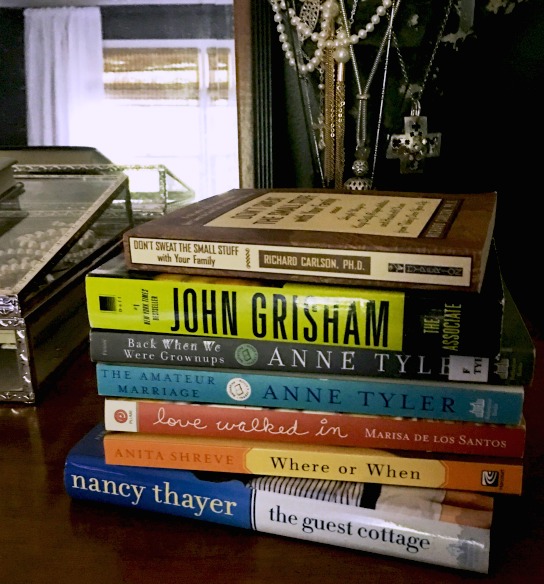 Last week was our public library’s big annual used book sale, which they conveniently hold in the gym of the community college near my house. My mother-in-law and I spent an hour or so browsing through the books, and I came home with the stack pictured above. A couple of notes about my picks:

Those are a couple of the books I plan on reading soon, and here are a few of the books that I’ve read and enjoyed since I did my last Book Report post (almost two years ago!):

Hillbilly Elegy: A Memoir of a Family and Culture in Crisis by J.D. Vance

This book got rave reviews and ended up on a lot of “best of” lists from last year. J.D. Vance is a young man (currently in his early 30s) who spent time as a Marine and went on to graduate from Ohio State and then Yale Law School. This despite the fact that he grew up poor, splitting his time between depressed towns in Kentucky and Ohio, with an absent father and an addicted mother. This book would stand on its own as one man’s amazing story, but what makes it especially compelling is that J.D. Vance’s early life experiences are shared by so many of the white, working class poor living in the Rust Belt today. Many people turned to it to help understand some of the issues that played out in last year’s Presidential election. This book has really stayed with me; I think back to it often.

Destiny of the Republic: A Tale of Madness, Medicine, and the Murder of a President by Candice Millard

Candice Millard is one of those writers that makes history read like a novel. In Destiny of the Republic she tells the story of the assassination of James Garfield, a reluctant President who would only end up serving for a few months. Garfield didn’t die right away after being shot, however, and there were a number of fascinating real-life plots that played out in the meantime, including Alexander Graham Bell’s attempt to invent something to save Garfield’s life. This was one of my book club’s picks and it generated a lot of animated discussion.

How about something a little lighter, like murder among friends? I’ve read a number of Liane Moriarty’s books but Big Little Lies is my favorite so far. Like all of her books, it takes place in an upper class suburb in Australia, and involves drama among the carpooling, PTA set. You know right away that someone dies (at a school fundraiser no less) and the rest of the book recreates the sequence of events leading up to the murder. HBO created a miniseries based on this book with a great cast that includes Reece Witherspoon and Nicole Kidman. I ordered a free trial of HBO just to binge watch it. I’ve heard Reece Witherspoon say that they’re working with Liane Moriarty on how they might continue the story for a second season. Fingers crossed!

What are you reading this summer? Anything good?

P.S. On being in a book club and Can you name ten books that have affected you in some way?

Linking up with Modern Mrs. Darcy