This has been a long time coming. But it’s time. I’ve decided to break up with beverage dispensers. 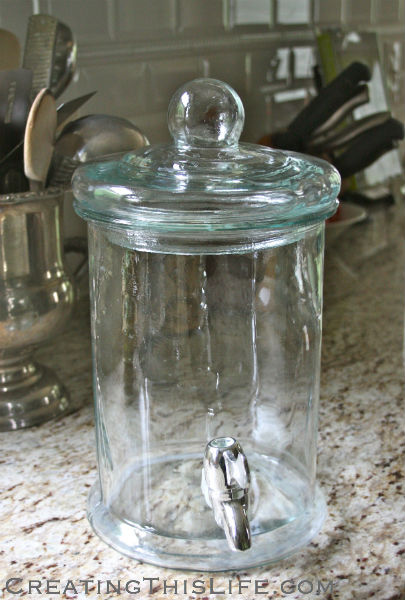 Earlier this year I ordered a pair of beverage dispensers online. They were made of decorative glass, had shiny silver spouts, and sat on a lovely wire rack.

The box arrived and I stashed it in the garage, since a set of beverage dispensers with a lovely wire rack isn’t something you need everyday.

The box sat there for months.

Until last Sunday, when I was having a group of high school kids over for a Student Council dinner, and it occurred to me: now was the perfect time to use the beverage dispensers!

When I went to get the box from the garage I noticed that it made a kind of tinkling sound as I picked it up.

The sound wasn’t a good one, but I was hoping it was the wire rack, or some loose parts, or something.

I carefully opened the box, removed the styrofoam and discovered a completely shattered beverage dispenser, and it’s twin, the one with a crack.

I should have known better than to order breakable items through the mail and then let the box sit in the garage for months. In fact, I thought about that very thing every time I got out of my car and saw the box sitting there.

That and the fact that I probably shouldn’t have bought something that would be used so infrequently in the first place. Because part of the reason the box of dispensers with the rack sat in the garage for so long was because I couldn’t decide where to store them.

But that’s not when I decided to break up with beverage dispensers.

No, it’s just the latest chapter in my long, sad history with beverage dispensers. A history that goes back at least 25 years when I saw a crock-style stoneware dispenser at a bridal shower and decided I must have one of my own.

Once I had it and started using it, I realized that it leaked around the spout.

And of course all of this annoyance happened at the best possible time: when I was entertaining.

I finally gave the thing away.

But apparently I wasn’t quite done with beverage dispensers.

Because eventually I bought another one – a sturdy, clear glass number – hoping my bad luck was behind me.

It was the same dispenser I dragged out after I realized my new set with the lovely wire stand was broken.

And I already knew that – hallelujah – this one didn’t leak.

In fact, too much liquid coming out isn’t the problem at all. Quite the opposite. Once the spout is turned the beverage inside comes out verrrrrry slowwwwwly.

So when I was filling drinks for the high school kids and asking: “water or lemonade?” I died a little inside when they’d answer “lemonade!” because I knew their lasagna would be cold before their cup was full.

And I’d stand there making awkward conversation and unfunny jokes about how slow this dispenser was, while they patiently waited for their lemonade, which ended up being about ¾ of a cupful since we’d get tired of waiting.

That’s when I started thinking about breaking up with beverage dispensers.

And then my husband found himself on drink duty, and he got to that point that you always get to with beverage dispensers, when you have to start tipping the dispenser to get anything to come out at all. He asked me to pour the rest of the lemonade into a pitcher.

That’s when I was pretty sure I was going to break up with beverage dispensers.

And then the next morning as I was cleaning the kitchen, I realized that the floor underneath where the beverage dispenser had been was sticky from the drips of lemonade that happened between cups.

THAT’s when I for sure decided to break up with beverage dispensers.

For good this time. No looking back. It’s me and pitchers from here on out.

P.S. A bookish resolution and dining rooms as libraries.